Lobbying by the Idaho Freedom Foundation 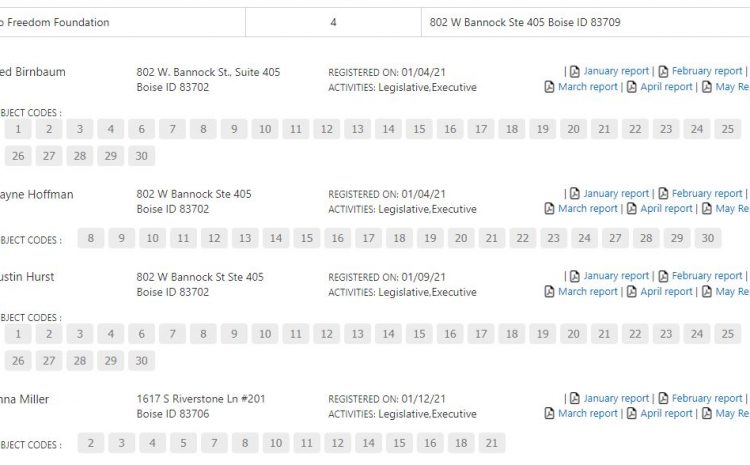 Judge for yourself whether the Idaho Freedom Foundation engages in lobbying by reading through part of a conversation that Hoffman had this year with Senator Steven Thayn, the chairman of the Idaho Senate Education Committee.

According to Idaho state law, Title 67 Chapter 66–
“Lobby” and “lobbying” each means attempting through contacts with, or causing others to make contact with, members of the legislature or legislative committees or an executive official to influence the approval, modification or rejection of any legislation by the legislature of the state of Idaho or any committee thereof or by the governor or to develop or maintain relationships with, promote goodwill with, or entertain members of the legislature or executive officials.

As you read through this conversation, you will plainly see how Wayne Hoffman is trying to influence legislation regarding teachers’ unions. Because some members of the West Ada Education Association participated in a sickout, Wayne Hoffman advanced that as a reason that the law should be changed so that all school boards in Idaho are no longer required to negotiate with any local teacher unions.

Here is a partial transcript–

Senator Steven Thayn: Now, most good parents send their kids to school, but they don’t give up the responsibility, if it’d be private or public. They still monitor to make sure education is taking place. So I don’t mean to give the indication that if you send your kids to public school, you’re never responsible parents. I don’t mean to say that at all.

Wayne Hoffman: But it allows for you to divest some of the responsibility, not necessarily all of it, but some of that responsibility and that’s an important thing. I want to get back to this thing though, before I forget, because it’s really important ‘cause there was a big conversation about the power of that, ‘cause one of the things that I thought that I had control over was if I had a complaint about the way the school was operating, I go to school board. Do school boards have the power they need to run their schools under Idaho law?

Senator Steven Thayn: Well, you probably have to break it down into different categories. Like curriculum, they can choose the curriculum. Can they discipline? Do they have tools to discipline teachers and students? Yes. Fairly regulated on how they spend the money. So specifically, what are you asking?

Wayne Hoffman: Do they have the ability to say, no, we don’t want to negotiate with a union that is either way left of center or behaves in a way that is egregious towards the parents and the kids who go to school here; the case that’s most obvious being the West Ada School District. The West Ada Education Association, did a sick out, really ruined the work plans of the parents and also the education plans of the parents and the students. And yet the school board is still going to have to sit across from them at the negotiating table, because that’s what Idaho law requires them to do. Why can’t the school board be able to say, nope, you behaved in a bad way, we don’t want to negotiate with you?

Senator Steven Thayn: Current law says they have to negotiate. If they’re represented by 51% or so of the teachers. Yeah, what it says. Now, it also is fairly lenient in saying that after a certain date, they don’t have to continue to negotiate. They can give the teachers union their last best offer. So it’s pretty open for school districts. But most school districts realize it’s a working relationship and so we want to make sure we don’t tip the scales too much. So there’s incentive for both sides to work together. And I think the system right now is pretty balanced. Let me go back to one other thing.

Wayne Hoffman: Yeah, I’m at a loss as to why this is so controversial. When I asked Representative Clow, your counterpart over in the house, same question, he had the same kind of very nervous chuckle also. I don’t understand that. There are plenty of states that have no public collective bargaining whatsoever. Idaho, 85% Republican in both bodies does and yet school boards don’t have the ability to say, we don’t want to negotiate. So the word in the statute is the school board shall negotiate with the union. Not may negotiate, shall negotiate. And-

Senator Steven Thayn: And then what does the statute go on to say?

Wayne Hoffman: It goes on to say a lot of things, but I mean, tell me something specifically.

Senator Steven Thayn: Well, specifically it doesn’t say they have to agree that the last best offer of the school district can stand.

Wayne Hoffman: There’s a last best offer but the question is, should we have a little bit more latitude for the elected school board to be able to make a decision about whether they want to negotiate or not? And that might also put in place an incentive for a union to not behave badly as they did in Meridian.

Senator Steven Thayn: So, I gave you the answer, you didn’t like it, and that is so if you don’t like the answer, that’s fine.

Wayne Hoffman: It was fine. I was just trying to understand why it’s so controversial. I mean, the police departments don’t have required collective bargaining with the cities in which they engage. They either want to negotiate or they don’t have to negotiate. That’s up to the cities. We give them that at the city level, but for some reason, school boards aren’t allowed to make the same decision. Okay. You disagree? That’s fine. Just wondering why that is.

Senator Steven Thayn: So in my legislative career I’ve had a couple of maxims. One is to focus on what’s good for kids. And basically because teacher’s union, Idaho was fairly, they don’t have much influence at the state legislature. They might out in the districts. I don’t know, but I don’t pay much attention to them. So I don’t go out of my way to change what’s going on with them. You know, during the time Tom Luna was in the superintendency, we made some major shifts in the relationship between the teachers’ union and administration or the school boards. One time they had this evergreen clause, we got rid of that. So we’ve made some … If that balance needs to be changed again or reconsidered, I’m all for talking about it, but you just asked me-

Wayne Hoffman: You don’t think they need to be changed. I mean, for some reason, you–

Senator Steven Thayn: I haven’t heard any concerns about it.

Senator Steven Thayn: So is there something else you want to talk about ‘cause we disagree on this one?

Wayne Hoffman: No, that’s fine. Okay, we can … I’m just kind of, I’m fascinated, endlessly fascinated why a Republican legislature in a Republican controlled state is so afraid of rebalancing the tables when it comes to the labor unions. But we can move on to other things.

Senator Steven Thayn: Yeah, we can move on.