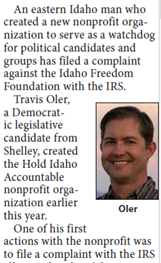 An eastern Idaho man who created a new nonprofit organization to serve as a watchdog for political candidates and groups has filed a complaint against the Idaho Freedom Foundation with the IRS.

One of his first actions with the nonprofit was to file a complaint with the IRS alleging that the Idaho Freedom Foundation violated its nonprofit status by engaging in excessive lobbying.

The complaints cited in this article are not an exhaustive list of complaints against the Idaho Freedom Foundation. The complaints are included because the sources agreed to speak publicly and in detail about them.

The Idaho Freedom Foundation did not respond to emailed requests for an interview from the Idaho Capital Sun sent June 15 and July 6.

Launched in 2009, the Idaho Freedom Foundation is a 501(c)(3) nonprofit organization that advocates for conservative ideas and limited government. The organization is well known for its Freedom Index, a scorecard that rates many — but not all — bills under consideration by the Legislature based on 12 criteria.

Oler’s complaint with the IRS

Oler said his experience looking up rules and regulations for 501(c)(3) organizations while setting up his own nonprofit informed his decision to file a complaint with the IRS.

“I thought that the Idaho Freedom Foundation is 501(c)(3), so I should set my organization up the same way,” Oler said. “I realized that would be the wrong thing to do because a 501(c)(3) is not supposed to be directly or indirectly involved in political campaigns, especially on behalf of candidates.”

Oler flagged the Freedom Index in his complaint, saying he thinks rating candidates is an endorsement. Oler doesn’t have a problem with organizations that get involved with campaigns, lobbying and elections. But he thinks the Idaho Freedom Foundation isn’t registered properly.

Keough, a Republican from Sandpoint, is the longest serving female senator in Idaho history. She served 11 terms in the Idaho Senate between 1996 and 2018, finishing her career as the co-chairwoman of the powerful, budget-writing Joint Finance-Appropriations Committee.

Keough is a member of the Idaho State Board of Education and the executive director of the Associated Logging Contractors, itself a 501(c)(6) nonprofit.

“On the political side, I believe they also flouted, and in my viewpoint continue to flout, state sunshine laws requiring lobbyists to register, although they are now registered correctly,” Keough said.

Keough was a regularly scored low on the Idaho Freedom Foundation’s index. In 2016, Keough earned an F- on the organization’s scorecard. In 2018, she earned a D+.

For years, Keough said the foundation held her freedom scores against her and pushed it heavily during the campaigns after the Idaho Freedom Foundation launched in 2009.

“The campaigns I was involved with in running for the Senate, they pushed the envelope as a nonprofit organization in the type of information they put out,” Keough said. “Sometimes in the early years they went over the line, I think, in their information and were actually advocating against me and others who were up for re-election, in my view. They’ve created a separate organization (Idaho Freedom Action), but it’s still run by the same people.”

On the campaign trail, Keough said she was constantly bombarded by her F ratings from the Idaho Freedom Foundation, to the point they became a huge talking point in her races. It came via the scorecards, quotes Keough said were taken out of context and not telling the whole story about complex pieces of legislation and budgets that Keough voted for.

“I didn’t feel pressure as much as I felt anger because it’s just not appropriate,” Keough said. “It’s one thing to say, ‘I’m from XYZ organization and this is our perspective, we hope you can see it.’ And it’s another to attack your integrity and put a false narrative around your intentions. In my book, that’s dirty politics and has no place in Idaho.”

Keough said she complained to Hoffman and filed a complaint with the IRS, which she never heard back on.

“In my mind they clearly have crossed the line in what the IRS regulations say, even though they are wising up, I guess, they are … pushing the limits,” she said.

This article is a shortened version of an article that appeared on the website of the Idaho Capital Sun and also appeared on the front page of the Post Register and the Idaho Press. See https://idahocapitalsun.com/2021/07/07/multiple-complaints-accuse-idaho-freedom-foundation-of-breaking-nonprofit-rules/